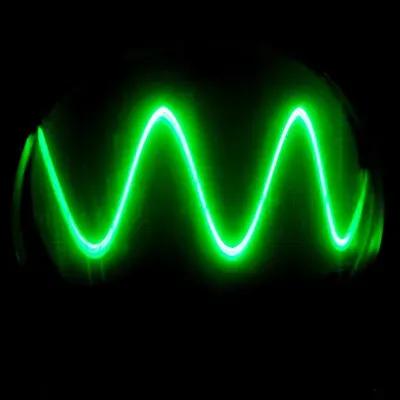 Article summary: I write a python program that turns an animation into an audio-file which encodes position data as left- and right channel voltages. When an analogue oscilloscope receives the audio-input in will render the animation on the fluorescent display. Videos of the result can be found in the end of the article.

En example of drawing a triangle using X-Y mode is shown in the image below. The point at the top of the triangle corresponds to the X-input having 0 V and the Y-input 3 V. By alternating between the points (0, 3), (-3, -2), (3, -2) the triangle will be rendered. Because the emitter is always turned on even when it is moving between points it will illuminate the parts of the screen in between the points as well. If the voltages are cycled fast enough the triangle will have a nice uniform brightness.

Alternate the X- and Y-channel voltages between the three points shown to draw a triangle.

To create something more interesting to render on the oscilloscope screen I used Blender to create a simple animation of a wireframe sphere and exported it as a sequence of 64×64 8-bit depth PNG-images. A single frame of the animation is shown below. The resolution shown here is a bit higher.

The animation target. (You'll have to pretend it's rotating. I haven't added support for animated images in this blog-framework.)

To draw something on the oscilloscope the animation needs to be converted into voltages which maps to the coordinates in the image. This can be easily done in a stereo audio format where for example the left audio channel could correspond to the X-channel and the right audio channel to the Y-channel. It’s easy to hook up the oscilloscope to an audio source. The actual problem here is figuring out in which order to visit all points in the image in a single frame so the trace doesn’t cut unnecessarily across empty parts of the image. If we just naively visited each coordinate in the frame in no particular order the result would be a mess on the oscilloscope screen. We don’t want the trace to move over empty parts of the image unnecessarily. This is similar to a problem which appear in graph theory which is called the traveling salesman problem. We have a list of coordinates in the image which the trace needs to visit and we want to find out which order we should visit all points. If we minimize the total distance traveled the trace will mostly track the actual parts of the image.

To create the animation for the oscilloscope I used python. First I had to write a function which turns images into a coordinate list. It accepts a 4D array where the 3 first axis corresponds to the brightness values for the colors red, green and blue and the last axis is the alpha value, i.e. an RGBA array. Since we don’t care about different brightness levels and we only care if a pixel is “turned on” I convert the array into a boolean array using a threshold to determine if a pixel is turned on or not. If the average of the three color-channels is above the threshold then the pixel is determined to be in the on state. I then isolate only the pixels being in the on state and return the coordinates for them.

The next step is to solve the Traveling salesman problem for the coordinates. Conveniently it’s a famous problem and implementation of solutions are easy to find. The solver uses a distance-matrix. To use it we need to calculate a distance matrix for the coordinates for the pixels in the frame being in the “on” state. The matrix is only a description of the distance each position has from each other. For example if there were 32 coordinate to visit the distance matrix would be a 32×32 matrix. This is easily done using scipy. We then call the Traveling salesman problem solver using this.

All that’s left is to iterate through each of the frames in the animation, solve the traveling salesman problem for each of them and encode the path in a stereo audio format. There are simple to use wave-functions included in scipy. To save a wave-file you only need the channel data and to specify which sampling rate to use. For stereo audio we call the library with a 2d-array of channel data.

All that’s left is to play the audio data while the oscilloscope is hooked up to the audio output.

Slow-motion capture of the trace moving across the sphere’s outline.

The video below shows the sequence of the animation. I’m slowly adjusting the oscilloscope intensity throughout the video. Because of the camera sampling rate the result appears more flickery than it does in person.

Because I used low resolution images (64 by 64) the result is quite jagged. It’s possible to see traces passing through empty parts of the images as well. Solving the jaggedness could be done in multiple ways, for example increasing the resolution (but which would also greatly increasing the computational demands for the traveling salesman problem solution). It would be possible to add some random noise to the coordinates which would smooth out the image or it would be possible to interpolate between coordinates. I’m however happy with the result as it is now.

Other algorithms than solving the traveling salesman problem could be used to achieve a better result. For example vector graphics could be used for the animation instead of png-images. Vector graphics are already more suitable for this implementation since they already describe and encode paths. It’s also possible to write a simple path-solver which work better for cases where the graph is already mostly connected. In the case I have shown here there is never an actual need to move across empty parts of the images and writing such a solver is not that difficult.

This has been a fun project to make use of my old electronics equipment. Watching these old fluorescent displays in action in person is always cool.

Source and files at github

Receive satellite images from NOAA-satellites yourself.